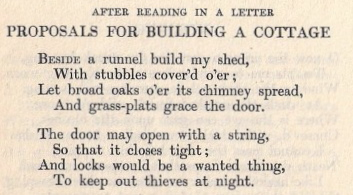 Last Summer I wrote a post which included the above verses by John Clare.  I should have noted his words – particularly “The door may open with a string” I guess I didn’t appreciate what he was talking about. However, I have just made a former problem door open with a string.

This iron sneck was part of the problem, reducing, as it did, the door opening by just enough inches too catch your elbow whilst passing through with a tray, ouch! Again!  The real problem wasn’t the sneck but the door opening which was 2 inches narrower at the sneck side compared to the hinge side.  So after 20 years of putting up with it, I decided to sort it out.  I called my bother down to have a look at it and advise whether altering the opening might cause any structural problems, there is a ceiling beam quite close to the door lintel.  He cunningly suggested that it might be easier to change the door handle.  Well thought.

It rang a bell that I had seen a wooden door mechanism somewhere, had a bit of a search online, found a very interesting book: Shelters, Shacks and Shanties, by D.C. Beard.  This had lots of plans for scouts to make shelters in the Great American Outdoors in 1916.  There were interesting foot operated latches and hidden ones concealed behind a nail.  All more suitable for a cabin external door than our dining room.  But there was one operated by a string that hung outside, but which was pulled inside if you didn’t want visitors barging in.  I’d seen this before somewhere – ah yes Eric Sloane!

Again it was for a barn door, but our house is a cottage so still in keeping.  I started a prototype (which ended up being the actual) from 1/4 riven green oak.  All a bit fiddly as I had no dimensions to go on, apart from the restrictions of the existing door and its frame.

The spring was fun, you can adjust the strength by the length of the thin section and by adjusting the height and angle of the spring fixing block. As above, I rigged it on a piece of scrap to get the latch to open in the keeper without jamming.  However, could only really arrange the string live on the door.  Made a handle for the string, as we don’t really need to lock people in the kitchen, and it’s a lot easier to work.

This is made from an interesting piece of dying hawthorn, it is almost purple where it is dead in the centre of the stem, then a band of black melanin – so presumably there’s a fungus at work in there.  The white stuff is the live sapwood (now dead, of course!).  I had to adjust the handle until it balanced level (not as above).

Just about level, even though a little out of focus.

I’m leaving the screw holes in the door, to remind us to be thankful we don’t bash our elbows anymore.  I’ll fill and paint the one in the frame though