This long marquee has many extra straps and wooden pegs/stakes to hold it up. No wonder, it was windy.

“Well I woke up this mornin’,
So glad our tent hadn’t blown down.”

We were in territories new and unfamiliar, East Sussex in the South of England, near the sea and the South West wind.  The land where trugs are made and called trugs, not bodges, as in Kent. In Herstmonceux pronounced Herstmonzoo.  Blimey, these names down South very long and complicated, not like Strid, or other Northern simplicities, OK well, there are exceptions like Mytholmroyd and Micklethwaite.

Now here’s Mike Church, working away like a good ‘un on trugs for an American order  (I suppose a “Speed trug-making” video would have been good here – Ed)

Sussex trugs have been going for a long time, in fact they are “Royal” because Thomas Smith, their inventor sold some to Queen Victoria on the first day of the Great Exhibition in Hyde Park London in 1851.

Here’s the oblong I bought my wife:

Before we arrived at Herstmonzoo we stopped off to have a look at Great Dixter gardens (& hall/house).  Well worth a detour (as they say in Michelin guides).

Great Dixter Entrance, yes the porch does lean cocked towards the left.

A small sample of the planting style at GD.

I took no photos of the house interior, as this wasn’t allowed, but it was a fine mixed collection of 17th/18th/20th century furniture in a stunning timber-framed early 16th century hall.

I was rather saddened to find that the old central heating radiators had mostly been disguised by covering them with a butchered antique chest, must have been when they were out of fashion, the alterations responsible were designed by Sir Edwin Landseer Lutyens, OM, KCIE, PRA, FRIBA and Nathaniel Lloyd in 1910.  Some of them had rather fine carving in the 17th century style.  Here’s a picture of one from Country Life 1995.

It was a fascinating place to visit with the hop drying oasts open to view and bodging in the great barn where ladders and hurdles are made.

The Bodgers’ Ball was held at Herstmonseux in a strong gale.  In a field provided by Richard Bingham.

Mainly in a massive marquee which billowed and creaked over the whole weekend, occasionally bursting the odd wall pole.

These gatherings are a great way of meeting up with people … you met at earlier Balls and also new people you’ve not met before, but all of whom have a common interest and to some degree a common attitude to parts of life.

What I got from The Ball this year

How to wind a length of string in a figure of 8 on two digits so it doesn’t tangle.  Learnt that from this fellow, you may have seen before. B Carder esq. (middle)

Breakfast at Mark Allery’s bar. Looks like the wind blew away some of Alan’s hair. (right)

Learnt how to make a frame saw while your tent is blowing down around you, including making a fix-it saw blade from a piece of wire.  Well done Sean (and stop taking self-portraits with my camera – right? (Otherwise I’ll have no option than but to publish the evidence)). 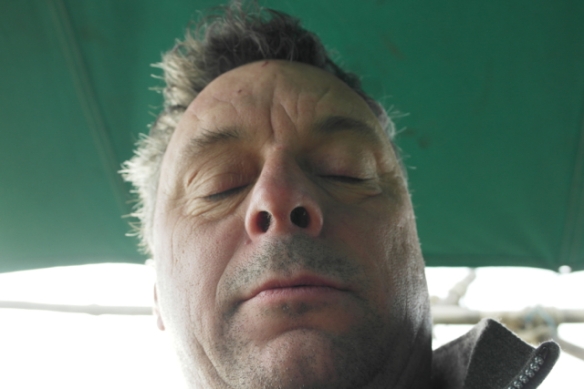 thanks to Ritchie McBride.

In the auction I successfully bid for a French side axe, more of this in a later post.

I discovered that the bodgering world is not yet ready to propel itself back into 17th century green joinery.

But I’m working on it.  Watch out Worshipful Company of Turners, my cricket stool is coming!

And that the Sussex coast is about 7 hours away from Strid Wood, where herb paris is blooming (again)