We’ve been to Eccleston near St. Helens, to see some draft and history and meet some friendly people.

Mark Constable was there, forging fire steels in his minimalist bucket forge running on charcoal and an airbed bellows.  We had a good chat about making the forge lining, refractory cement, flue vermiculite, beeswax finishes and the general wonder of making a hard lump of metal into the shape you wish.

Mark’s charcoal forge. His own photo from his website.

I don’t think I mentioned that I started a short coursette in blacksmithery at Craven College last week, blimey, rather louder than Strid Wood what with 5 fires with their electric blower and extractor fans, 9 people bashing metal and shouted chit chat.  I’m making a snail – slowly.

Pepper had brought his boss Phil Gregson worshipful wheelwright along with him, I hear Phil is crossing the pond for a grand tour of US museums and that his progress will be tracked and reported on a specially souped up soon to be upgraded website. He’ll be at Colonial Williamsburg first off (in period costume!).  Phil had brought his band of Lancastrian bodgers along and we had a bit of a natter about this and that things woody.  I failed to take any photos as I was lugging my stock knife around with which I was going to demo peg-making, but the rain was against us.  The Wobbly Wheelwright beer was a great success though.

Here’s the set up, pole lathery, spinning, spoon carving and the odd wheel.  Phil and grandfayther under the shelter and Pepper posing for the camera, centre. 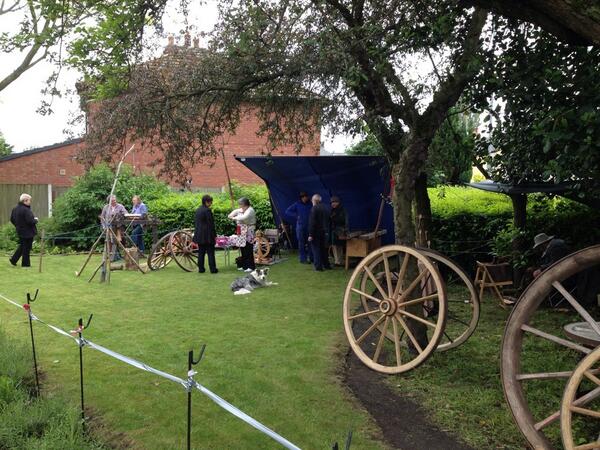 Tip of the cap to Cllr Michael Haw ‏@CllrMichaelHaw

Eventually the rain got the better of us, so, as planned we departed for Gawthorpe Hall

The entrance doorway gives a taste of what’s inside.  An Elizabethan Manor House, built around an earlier tower, with Victorian remodeling in the 1850s by Sir Charles Barry, designer of the Houses of Parliament.

There is no photography allowed inside so the pictures are from the excellent National Trust’s collections database.

The remodelling didn’t stop at the building, the furniture has been hacked about in many cases, original panels and friezes reworked into mongrel creations:

I’m not sure whether this is a “marriage” but that pierced apron below the seat looks odd.  This one is more obvious:

However, there is enough there in its original simple condition:

Detail of above settle.

The plaster work on the ceilings is stunning, the drawing-room especially.

There are even two of the original family cast in plaster

Thanks go to Michael P. Conroy for his extensive research on the Shuttleworth family. Much of the information on this webpage is taken from his 1996 booklet1, “The Shuttleworths of Gawthorpe.” Thanks to Deborah Nouzovsky for bringing out the fact that Winston Churchill is descended from Hugh and Anne Shuttleworth.

As if all the woodwork and architecture were not enough, the Hall houses the Gawthorpe Textile Collection.  This is an amazing collection of mostly hand worked textiles from many eras and countries collected and many produced by Miss Rachel Kay-Shuttleworth (1886 – 1967).  Not only historical artefacts are there but also the crafts are kept alive (as Rachel wished) with resident craft workers and workshops. Feast for your eyes!